The capacity of the port of Cotonou, often described as the “economic lungs of Benin”, was increased under programme designed to boost access to the country’s market. As part of the extension project, Soletanche Bachy was awarded a contract in August 2009 to design and build a 660 metre long quay with a draft of 15 metres.

Carried out by a joint venture that also included Sogea-Satom and Dredging International, work on the south quay, like that on the north quay, consisted in building two parallel diaphragm walls connected by a layer of tie rods,followed by general earthworks, civil engineering, quay equipment (apart from rolling stock) and dredging. 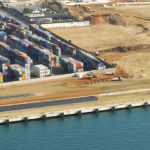