The port of Sept-Îles on the northern bank of the Saint Lawrence River 650 km downstream from Quebec City is ideally located along one of the major shipping routes between North America, Europe and Asia. It is one of the largest bulk ore ports in North America. In 2014 the port acquired a multi-user dock that can accommodate Chinamax VLOCs.

Between October 2012 and June 2014, Bermingham and Balineau – respectively a local and a specialist subsidiary of Soletanche Bachy – combined their marine works capabilities to install the piles to support the main wharf and the approach jetty.

The teamspaid careful attention to the many species of marine mammals living in the area and introduced a series of systems to reduce noise during the works. 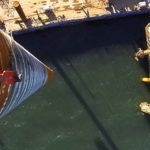